As it seems to be popular in the dev community these days, for the first time ever I've decided to write my own summary of 2019. I'm curious how 2020 will compare but this is definitely not a contest. I am done putting pressure on myself in order to accomplish imaginary goals.

I'll preface this by clarifying that I'm trying to keep personal stories to a minimum, especially on this website and blog, but also on Twitter. My online presence is strictly focused on developer-related topics and I intend to keep it that way.

Briefly though, 2019 has brought more personal tragedy than previous years. Thankfully, things are settling down, but the reality is that as we grow older and feebler, so do those around us, and these tragedies become more commonplace.

I won't give too many details about my day job, but I've been working at the same company for the whole of 2019 and then some. In the spring I shipped a new project that has been running successfully in production ever since. It's something I built entirely on my own (team of 1) and I'm pretty happy with the way it turned out and how it performs. Very importantly, it has been running without a hitch and very little supervision, which allows me to go on a lengthy vacation without having to worry about it.

At work, most of our stack is Laravel, plus a sprinkling of Vue and other technologies. Myself, I use TailwindCSS for the projects I own. I am very grateful for this stack, as there aren't alternative technologies I'd rather use at the moment.

Another thing that I'm very satisfied with is the amount of new features I built in 2019, both on the project I own, as well as another that I collaborate on. I get a lot of satisfaction out of building things with code, and this has contributed to an overwhelming majority of days when I didn't dread going to work. Laravel has been a huge factor in this, as it makes problems a lot easier to solve and significantly more pleasurable.

It turns out that this blog is now a little over a year old. I say "blog" and not "site", because I started out with an entirely different concept and domain in 2018, only to change it later once I had a better idea what I wanted to do. The blog articles, however, were carried over.

For those who have no idea what I'm talking about, the site started out as a sort of "launchpad" for my personal projects. I intended for it to be an "organization" under which I would bring together the work I do in my spare time. I called it Omigo.sh, trying to be cute.

Towards the end of August 2019 I realized that it would have served me a lot better if I had made a portfolio website instead of an anonymous pseudo-organization. So I changed it to what you see today, preserving all the blog posts. Now, the landing page is a brief summary of my portfolio with a little bit about myself.

In 2019 I posted a total of 38 articles which seems way more than I remember writing. As with my tweets, I don't have any kind of schedule for writing articles. I do it when I have something to say, which could happen two days in a row or once every two weeks. My posting frequency is very much influenced by all my other hobbies and activities, as I have to share time between them.

I use Google Analytics to track visits to the blog, which helps stroke my ego occasionally when I check on it and notice the traffic increasing. I was pleasantly surprised to find that there's been a pretty healthy increase in visits since I switched over to the current domain. 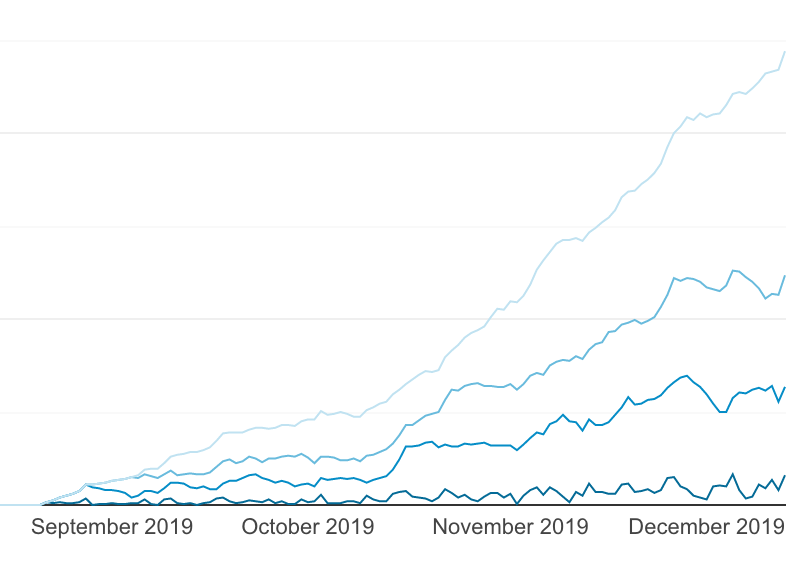 There's been a lot of discussion in the community about the ethics of using Google products, especially Analytics. To tell the truth, I feel a bit icky myself using it, and I'm mulling switching to something else. I might just to that in 2020, but for now feel free to use an adblocker, because I have nothing to sell and I don't really care.

I write a lot about solutions and fixes to all kinds of edge cases and gotchas that I run into in my day-to-day work. This makes for some niche articles that are, understandably, not very popular with everyone. Here are some of my most visited articles in 2019 (from most popular to least):

2019 was the year I hoped to "launch" my nearest and dearest personal project to the world, and that is 1Secret. While 1Secret has been up and running for over a year with a tiny handful of active users, it's still technically in beta. You can sign up and start using it if you want, but it's just not there in terms of how I want it to work.

1Secret is a service that allows you to share sensitive data (text of files) through unique URLs that expire after a set time. Once the URL (or secret) expires, the data is destroyed on the server permanently.

While I'm fully aware that one should not delay a launch indefinitely until some imaginary goals are met, I'm just not comfortable announcing it at this point. There are some architecture changes that need to be done now rather than later, to ensure long-term viability. I'm not in any particular rush though.

This one's an expense tracker that I started over a year ago but shelved to focus on 1Secret. It's something I need for my own expense tracking needs and I really hope I'll be able to get back to it soon.

I came up with an idea related to mountain biking and MTB trails that I built a proof-of-concept for on a weekend. It's a very simple tool and quite niche but it looks promising, so I might build a very simple version of it.

My idea list is ever-expanding. I'm sometimes tempted to try some of them out but I want to resist being pulled in too many directions.

2019 has been the year of Laravel and Vue exclusively. The only other technologies (in the same ecosystem) that I've tried briefly are Livewire and Alpine, both by Caleb Porzio. I used the former on a little demo project, while the latter is currently used to build new dynamic functionality on 1Secret. They're both amazing and I'll definitely use them extensively going forward.

Health-wise I'm good, and there weren't significant changes in my fitness routine, except for one thing. I continue to hit the gym 2-3 times a week for weightlifting and then I usually ride bicycles on the weekend.

In 2019 I've transitioned more towards mountain biking, moving away from the road variety. This year I finally took the plunge and bought my own mountain bike. Even though it happened late in the year, it has already helped me improve my trail-riding skills. I signed up for a 2-day mountain bike camp in the spring of 2020 and I'm very excited about that.

In 2019 I only read 13 books unfortunately, which is less than the previous year. This can be explained by the other hobbies that demand my time, as well as the fact that few of these books have been truly engaging. Of note I'll mention the Dark Forest series by Cixin Liu, Kafka on the Shore by Haruki Murakami, and book 3 of the Expanse series, Abaddon's Gate.

I don't watch TV in the traditional sense but I do watch a fair amount of movies and TV shows.

I also watched 14 seasons from various shows. A really good one is Good Omens, especially since it has only one season. All the shows I watched were high quality and that's because I won't commit if I don't like it, as opposed to movies which are a one-off affair.

I've also been an avid PC gamer, although less so the last couple years. In 2019 I've played mostly World of Warships of which I'm a big fan, with a little of The Adventures of Van Helsing and Grim Dawn. After the announcement of Diablo 4, as a huge fan of the series and someone who's played all of Blizzard's games, I was struck by nostalgia and started playing Diablo 2 again. Ironically, my high-end gaming PC is used to run a 20-year old game, in 800x600 resolution nonetheless. Finally, I just picked up Bloons TD 6 (a tower defense game) on a whim for $1 and it's been surprisingly fun.

I don't expect things to change a lot in 2020, but there are a few ways in which I'd like to progress.

On the dev tech side, I'm looking forward to Laravel 7 and 8. I like to stay on top of upgrading all my projects whether at work or at home. Then there's of course Vue.js 3 which brings some new paradigms (composition API and other goodies). Tailwind 2 is also on the horizon and it always gets me excited when there are new updates.

As far as new technologies, I hope to get the chance to work with Inertia.js and Livewire a lot more. There's also Svelte which I keep meaning to learn but there never seems to be time for that.

Outside of dev stuff, I want 2020 to be the year of "taking it to the next level" in terms of mountain biking. Not only am I taking part in the 2-day MTB camp I mentioned, but I'll have a full season of dry trails to practice on with my own bike.

I would hope to read more books in 2020 but that's not very likely, unless I stumble across really good books that are easy reads and keep me hooked.

Finally, I plan to remain as healthy as before and I also wish that upon everyone who chances upon this article.